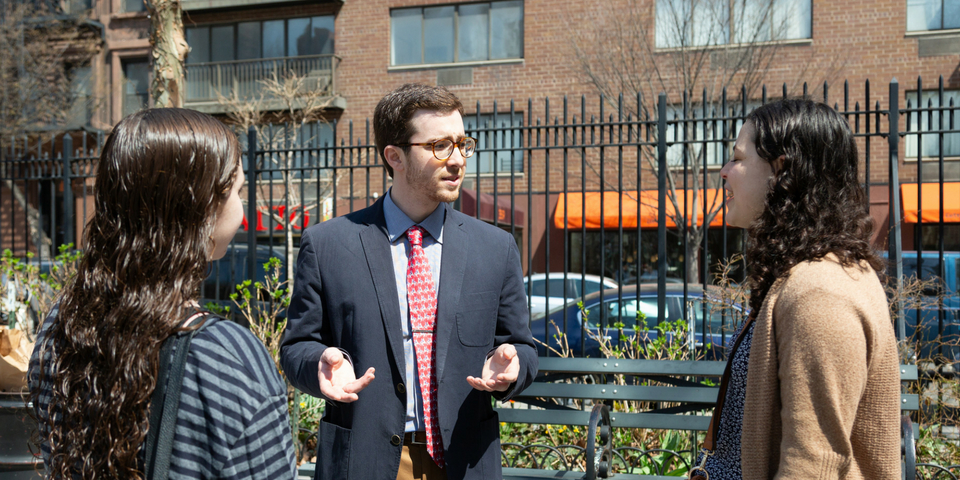 Thank you for electing me on September 13, 2018 as your Democratic State Committee Member. You may view the results of that race here. Along with my co-State Committee Member Lauren Trapanotto, we represent the 76th district, which consists of the Upper East Side and Roosevelt Island.

I’m a lifelong New Yorker, and though only 26 years old, for the past decade I’ve worked hard to strengthen the Democratic Party and further progressive priorities. Raised by a single mother in Nassau County, I experienced first-hand the struggles of economic inequality. Had it not been for our great social safety net put in place by Democrats decades ago, I would not be here. This is something I was aware of at a painfully young age, but it nevertheless showed me why we need a strong Democratic Party.

In fact, leftist activism and public service runs in my family. My mother was a Vietnam War protester, my grandmother a UFT school teacher, my great-grandmother read the Forverts every day, and my great-grandfather was a Democratic Party leader in Brooklyn. I’m proud of all they did and all they have inspired me to do.

In 2015, I was elected to be the Democratic District Leader for Yorkville. In that capacity, I represented the neighborhood to the New York County Democratic Party, fighting to rebuild what was once a proud organization. Professionally, I have worked for Council Member Ben Kallos, UJA-Federation, and as a producer for a PBS documentary series. Academically, I have Bachelor’s Degree from Johns Hopkins and a Master’s Degree from Columbia, both in Political Science.

Nothing is more important to me than making the political process more open and out of the control of party bosses. As District Leader, I fought to make the selection of judges and Democratic Party leaders more transparent and democratic. At PBS, I produced a documentary series on US foreign policy, Great Decisions, to better inform viewers of why US relations with Russia have sunken to their current level. At Council Member Ben Kallos’ office, I organized community events to better engage constituents with their local government.

My co-State Committee Member, Lauren Trapanotto, and I are fighting to bring power back to the people of the Upper East Side and Roosevelt Island. If we want to get progressive priorities passed at all levels of government, we need strong and engaged Democratic State Committee Members.

You can join us using

Created with NationBuilder – Theme by Tectonica